If you thought I’d miss a chance to share a spooky story today, well let me tell you, I’ve come ready to deliver! I had so much fun telling Baby’s story the last time, I thought I’d keep this party going.

So without further ado, enjoy!

*This short is copyrighted by moi and not professionally edited. Let’s remember to enjoy them in the spirit in which they were given when you come across grammatical errors.* 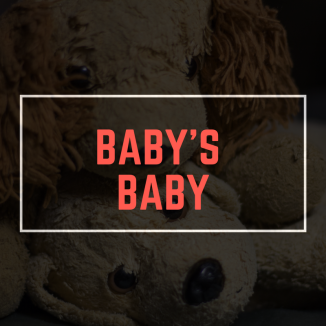 Tera stopped typing and listened. She’d been working for the last two hours and had completely lost track of time. But now, the unnatural quiet sent off a red flag.

“Baby! Tchotchke!” She called out.

She listened some more. The two little rascals were notorious for ignoring her, but usually Tera heard something.

“Dammit,” she muttered under her breath.

Tera had worked from home because she’d plan to get an early start on getting the house ready for Halloween. After their marriage, she and Manu had bought a home that was closer to town, as Baby had become adept at using his camouflage to hide from curious eyes.

She hoisted herself from her office chair with a sigh of frustration. Although Baby had gotten better at hiding his otherness from the rest of the world, Tera was never completely comfortable letting him roam unsupervised for large periods of time. Particularly, because his partner in crime, a pint sized Yorkie terror, Tchotchke was far to good at getting into trouble.

“Baby! Tchotchke!” She called out as she walked from her home office, peeking into Baby and Tchotchke’s bedroom.

Their favorite toys were strewn across the floor. She noticed that one of the newest toys she’d bought for Baby had its head ripped off. The rate that Baby went through toys was astounding, she thought. After checking to make sure Tchotchke and Baby weren’t hiding, she left the room.

Tera continued to walk through the house, calling out for her two little rascals, but there wasn’t a bark of recognition from Tchotchke, or the click of Baby’s claws on the hardwood floor.

When she walked into the kitchen she noticed the back door was ajar, and her heart dropped.

“Fuck,” she groused, and sprinted out the door.

Thankfully she’d pocketed her phone before starting her search and she sent Manu a quick text.

For the past month or two, Baby and Tchotchke had become quite the escape artist. It was frustrating mostly because she and Manu couldn’t figure out why they were doing it or where they were going. Also, it was occurring when she and Manu were at work and, as with now, when one or both of them would be home. They’d look up and not see either Baby or Tchotchke.

Do you need me to come home?

No, they couldn’t have gone far.
I’ll call you if I need you.

Tera smiled as she pocketed her phone. God, she loved her husband. She warmed at that thought, still not completely believing she had met a man so understanding and loving, not only to her but also her special pet. She sometimes wanted to pinch herself, or, she thought wickedly, have Manu do it himself.

Tera paused when she thought she heard a whimper. No, whimper wasn’t the right term, she thought. Tchotchke whimpered. This was closer to the sound Baby made when he was begging for treats.

But she thought, Tera tilted her head trying to follow where the sound was coming from, the noise was too…small?

“Baby?” she called out, trying to tamp down indication of distress in her voice.

Her mind raised at thoughts of what they’d gotten into. So far, Baby’s hunts had been limited to smaller prey, but she always lived with the fear he may have expanded his hunting outside of sanctioned times. Tera chewed her lip, and regretted she’d canceled Baby’s hunting trip last week. She’d been so tired and, although Manu had done all of the research on who the prey would be, Tera had been so wiped out.

Manu had done a phenomenal job of screening what prey would be appropriate for Baby’s unique taste. She never had to worry about a neighbor or the mailman going missing again. Not that she wouldn’t be happy to see the annoying man down the street that accused Tchotchke of destroying his rose bushes…well, she pulled back those thoughts. It would be too complicated regardless. As Manu said, prey couldn’t be to close to home.

She crept toward the direction she thought she heard the noise. Dammit, she shouldn’t have put off Baby’s hunt.

Tera scanned the area of the backyard, with squinted eyes. The new house didn’t sit on as much land as her previous home, but the backyard was expansive enough for Baby and Tchotchke to have enough room to amble around. Tera saw a bit of shrubby rustle and called out again.

This time she defiantly saw rustling as she scanned a corner of the yard. Moving in that direction, she tried to be as quiet as possible.

Tera felt a little lighter. Maybe Tchotchke and Manu were playing hide and seek after all. With a smile she jogged over to the spot and saw a flash of fur. Tera slowed her pace and moved in slowly where no doubt the spunky little Yorkie was hiding.

She pushed the shrubbery back as she shouted, but it wasn’t the pint sized terror hiding, instead it was…well she didn’t know what it was.

The sensation of a tail twining around her leg drew her attention away, and Baby’s serpentine head rubbed against her leg. The yelped she’d been expecting earlier finally came and Tchotchke peered from Baby’s side.

Not quite processing what was happening, she looked at the little…Baby? Oh, God, she thought, it was a little version of her Baby. But, Tera peered closer, it had a light layer of fur, where Baby was irridescent scales.

Baby ambled over to the mini version and ran a forked tongue over a tiny head.

When she would have crouched low to touch it, Baby stopped her with a claw.

“Can I hold it?” she asked, excitement bubbling up inside.

Baby’s head cocked, as if trying to register her words. It was a gesture she’d become familiar with, and waited. Baby clicked and chirped in a way she’d never heard before, and in the corner of her eye a shimmer occurred. It happened when Baby was dropping his camouflage and Tera’s eyes widened when the creature that had been hiding so close revealed itself.

“Oh, you’re beautiful,” Tera gasped, and looked between the new creature and Baby.

The new creature chirped and clicked and Baby responded. The newer creature that looked like her Baby, but different in subtle ways, moved forward cautiously. Tera held herself still and waited as it sniffed and slowly dragged a raspy tongue against her skin.

Tera’s fingers itched to touch, and as if sensing her need, Baby slinked over and rubbed against her hand. Watching Baby’s movements, the creature rubbed its head against her other hand and Tera giggled when she petted it.

Not to be left out, Tchotchke yipped and sprinted over to her, jumping at her shins. Snorting, Tera leaned down and petting the little dog.

The whining noise she’d heard earlier rose up from the tiny bundle of cuteness curled on the grass and Tera clicked her tongue on her teeth.

“Little Baby, are you hungry?” she asked.

Baby clicked and chirped, nudging against her hand.

“Oh, is everyone hungry?”

Tchotchke yelped and Baby clicked their affirmative. The newer sweetie nudged its head into her thigh.

Tera pulled out her phone and quickly sent off a text.

Sooo, what are your thoughts about
more pets?

There wasn’t a response immediately, and Tera continued to pet and coo as she waited. She couldn’t wait to get her hands on Little Baby, who sat whimpering softly. But her Baby kept a distance between them. Sweetie ambled over and licked Little Baby, and that seemed to sooth the little tuft of fur and teeth.

Should I leave work now?

Probably for the best. Oh, and can
you pick food up for Baby, off the
list?

Is this going to be a good surprise?

Tera bit her lip and started planning. It would be okay, she thought. There was no way Manu would look at Sweetie and Little Baby and not want to keep them.

“Don’t worry, my loves, Daddy will be home soon with food.”