I’ve never done this before on my blog, but when the lovely author Laurel Cremant sent out a request for a little bit of space on a few folks blogs I couldn’t say no. I’m a firm believer in supporting the efforts of my fellow authors and not long ago Laurel was ever so kind to ask me if I’d like to be showcased on her site without any solicitation on my part. Making connections with other authors that understand the pie is big enough for us all to have a slice is invaluable and it doesn’t hurt she writes some pretty sexy prose!

Without further ado, check out the hotness Laurel is presenting for your reading pleasure. Make to check back in on January 3 for another treat from Laurel! 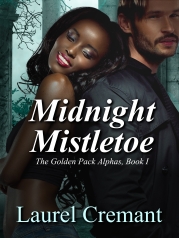 (The Golden Pack Alphas, Book I)

WARNING: This short novelette/short story of 8,000 words is the first book in this serial and contains snarky dialogue, extremely inappropriate uses of mistletoe, alpha HEROINES and the weres smart enough to chase them.

All were-hybrid, Georgia Walker wants for Christmas is to spend some time away from her pack and in particular, away from one increasingly dangerous enforcer turned Beta. She has every intention of spending her days basking in the warm Caribbean sun and indulging in an island fling, or two. Anything to forget the way a certain were made her pulse race and skin tingle.

Marcus Legrand has only one goal this holiday season, bring Georgia home and finally claim her for his own. Convincing the strong willed ice princess will take all of his skill and patience, but Marcus is no stranger to hunting prey. He has every intention of putting both his rank and heart on the line.

Taking a deep breath, she reached her arms overhead, arched her back and inhaled the balmy salted air.

She could almost hear her muscles sigh, but despite the relaxation attempting to spread through her limbs, her body tingled with a tension she knew settled too deep.

Her heat cycle was starting, and there was nothing she could do to relieve the discomfort.

Dropping her hands back down to her sides, she swept her gaze across the small beach. It wasn’t crowded but had a fair number of sunbathers and Zen cravers. And most importantly it had men looking for the same thing she was—a little fun, forgetfulness and zero strings.

Although heat pooled to her center, her stomach rolled in apprehension.

In the past she’d had no problems with finding a willing male to sleep with when she was in heat. She enjoyed sex, and although each year her parents hoped she would chose a permanent mate, no man in or outside of her pack inspired much feeling or devotion. At least not enough for her to be shackled to for life.

But last year, because of The-Wolf-Who-Shall-Not-Be-Named, no one appealed to her.

She had no intentions of repeating the experience. This week, she planned on proving to both her body and wolf, that Marcus wasn’t the only man capable of making her hot.

Her gaze combed the area, looking for a good candidate.

One particular man caught her eye.

He’d been swimming for the last hour, his caramel arms cutting through the water in languid strokes. But now he rose out of the surf resembling a naughty sea nymph, his strong legs leading up to deep blue board shorts. Dry, she guessed the swimming trunks were perfectly modest—but wet they molded to his thick muscled thighs and cupped his cock in a way that left very little to the imagination. And since Georgia’s imagination was better than the average wolf’s she bit back a groan and clenched her thighs tight.

Pushing her sunglasses up to her hair, she licked her lips as her gaze traced the diamond bright droplets of water running down his hard chest. They sluiced down his body, aided by the tight ridges of muscles along his abdomen, tunneling down to what looked like one hell of a stocking stuffer.

Merry Christmas to me.

Yes, an island getaway was proving to be the perfect holiday treat.

Her gaze meandered back up his chest and after making a brief note of thick smooth lips and tempting dimples, she made eye contact with her merman come to life.

His eyes gleamed with interest and her lips turned up in her best come-hither smile. He took a step forward and then froze, his gaze focusing on something just over her left shoulder. Shaking his head he turned and continued walking down the beach.

She frowned at his retreating back. Admittedly she was no super model but, she’d never had a problem with luring men her way.

A long shadow fell over her and it was her turn to freeze. Despite blocking out the sun, a heated scorch rippled down her body as the approaching shadow crept down her body. Her nipples pebbled to thick points, her pussy clenched and a slow growl worked its way up her throat.

Only one thing made her body react this way and she’d deliberately left it back in Golden Valley.

Laurel is a romance author, who like most writers loves to read. Her first love (pun intended) has always been romance. From the sappy YA romance novel to the more risqué erotica novels, Laurel is a sucker for a good love story.

Laurel writes paranormal and contemporary romance and is a self-proclaimed, out of the closet nerd. She admits that she can’t seem to avoid adding a bit of “nerdology” or “geek-dom” to all of her books. Living in Miami, she also admits that she can’t seem to avoid giving her heroines gorgeous shoes, “In Miami, we worship everything strappy, open toed and just plain hot!”